Angelina Jolie to auction the only painting Churchill painted in WWII 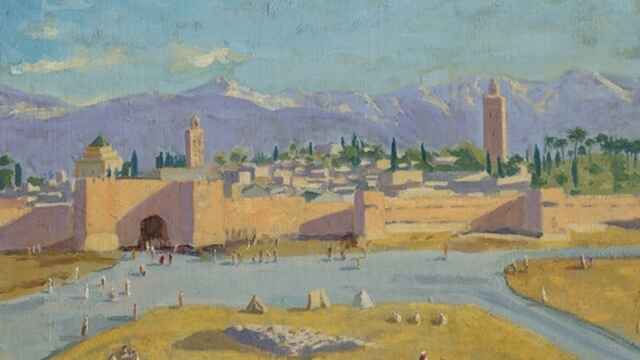 Considered the only work that the ‘Premier’ completed during World War II, the painting will be offered to the highest bidder with an estimated price of between 1.5 million and 2.5 million pounds (between 1.7 million and 2.8 million euros / between 2 million and 3.4 million dollars).

The painting, which depicts a 12th-century mosque under a Moroccan sunset, was a gift from Churchill to Roosevelt after the Casablanca Conference in 1943, where they agreed on a strategy to defeat Nazi Germany.
After the event, the British leader invited his North American counterpart to walk through Marrakech to show him the views of the city and the evening light, a scene that so impressed Roosevelt that Churchill decided to immortalize it as a memory of the conference. It was the only work that he painted during the war.

After the death of the American president, in 1945, the work went through several owners for decades until it fell into the hands of the couple that previously formed Angelina Jolie and Brad Pitt.

When they separated, the painting was in limbo immersed in speculation about the distribution of the extensive art collection that the marriage treasured. Now, the Jolie Family Collection will sell the landscape work, dubbed the Tower of the Koutoubia Mosque, as part of an auction of modern British art at Christie’s on March 1.

“[The painting] is possibly Winston Churchill’s best painting due to the importance of the subject for him and the fact that it highlights the magnitude of the friendship between the two leaders,” Christie’s representative Nick Orchard said in a statement.
Churchill began recreating scenes from Morocco in 1935, when his painting tutor, John Lavery, encouraged him to visit the country. The painting to be auctioned by Jolie, one of the fifty that Churchill dedicated to Morocco, aims to reach one of the highest prices for the ‘premier’ paintings at auction, according to the note.

Share. Facebook Twitter Pinterest LinkedIn Tumblr WhatsApp Email
Previous ArticleWalter Ricciardi, Draghi’s virologist: “Italy and Spain are chasing the virus, they are not anticipating”
Next Article These have been the best-selling home and kitchen products of the moment