With movie theaters, restaurants and a spa, this will be the first space hotel that will begin to be built in 2025 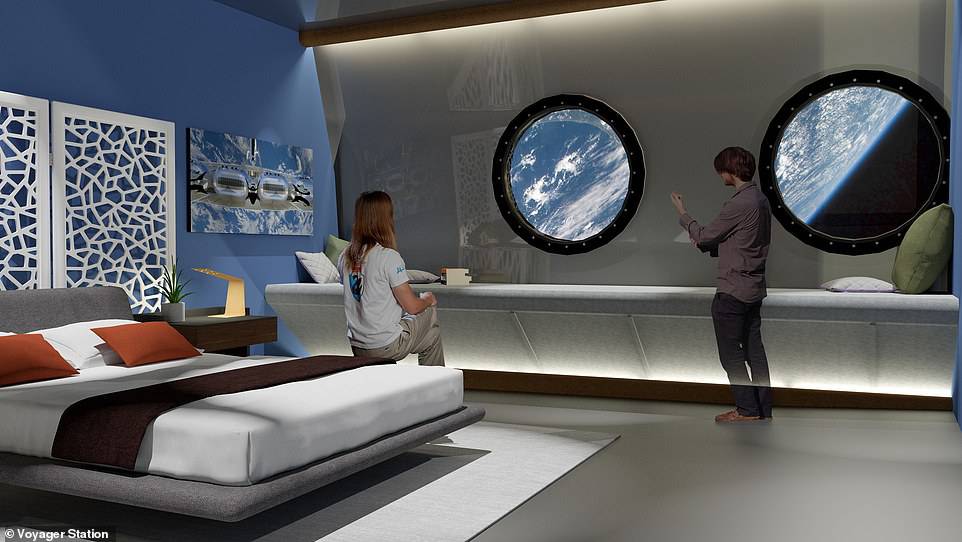 The Voyager station, where the hotel will be installed, will be the largest human-made object ever put into space.

Work on the first space hotel is scheduled to begin, in low Earth orbit, in 2025 and will come equipped with restaurants, a cinema, a spa and rooms for 400 people.

Developed by Orbital Assembly Corporation (OAC), the Voyager station could be operational by 2027, with infrastructure built in orbit around Earth.

The space station will be a great circle and will rotate to generate artificial gravity that will settle at a level similar to that found on the surface of the Moon.

The Voyager Station hotel will include many of the features one would expect from a cruise ship, including themed restaurants, a spa, and a movie theater.

It will have a series of capsules attached to the outside of the rotating ring and some of these capsules could be sold to companies such as NASA and ESA for space research.

Details of the cost of building the space station, or of spending a night at the hotel, have not been released, although the OAC indicates that construction costs are getting cheaper thanks to reusable launch vehicles like SpaceX’s Falcon 9. and the future Starship.

Some of the 24 modules will be in charge of the Gateway Foundation and will be destined for the accommodation of the crew, air, water and energy.

They will also include a gym, kitchen, restaurant, bar and other essential facilities for people who will be at the station longer.

A structure with various objectives

The other modules will be leased or sold to private companies and governments. For example, people could buy one of the 20×12 meter modules for a private villa or multiple modules to create a hotel with a spa, cinema and more.

Government agencies could use the station to house their own science module or as a training center for astronauts preparing to go to Mars.

Artemis, NASA’s plan to send a woman to the Moon for the first time

The idea of ​​an orbiting space station, built around a central circular wheel, dates back to the early days of space travel, in an idea by Wernher von Braun.

He was one of the architects of NASA’s Apollo program and in the 1950s he proposed a wheel-shaped habitat that rotated to create artificial gravity.

The concept of the Voyager station, which is a similar idea but on a much larger scale, first emerged in 2012 with the creation of the Gateway Foundation.

OAC, the firm established by the foundation to bring the vision of an orbiting station to life, was established in 2018 with the goal for it to be operational by 2027.

If fully realized, it will be the largest human-made object ever put in space.

How will it unfold?

The average cost of launching material into space has been about $ 8,000 per kilogram for a long time, but the reusable nature of the Falcon 9 brought this down to $ 2,000 per kilogram and SpaceX predicts that Starship will take it to a few hundred million. Dollars.

Starship and other fully reusable future spacecraft will make the station viable as it will allow for regular and fast connections between Earth and Voyager.

The discovery of a planet with three suns excites scientists

Each of these 24 integrated room modules will be 20 meters long by 12 meters wide and each will have a different function, from hotel rooms to movie theaters.

The firm also hopes its ring will include observation rooms, concert halls, bars, libraries, gyms and a spa – everything you would see on a cruise ship, but it will travel around the world every 90 minutes.

First, the team plans to test the concept with a much smaller scale prototype station and a free-flight microgravity facility similar to the International Space Station.

“This will be the next industrial revolution,” explained John Blincow, founder of the Gateway Foundation, adding that it will create a new space industry.

“Rotation is vital,” says Blincow, as it is not feasible to have people in a gravity-free space station for long periods of time, and people may want to be in space for months, especially when working in a hotel. .

“People need gravity so their bodies don’t fall apart,” noted Blincow, adding that the station can help us understand how much gravity our bodies need, as it can.

Share. Facebook Twitter Pinterest LinkedIn Tumblr WhatsApp Email
Previous ArticlePediatricians’ proposals for a safe and necessary return to school
Next Article The American abandoned in the trash as a baby who became a technology millionaire