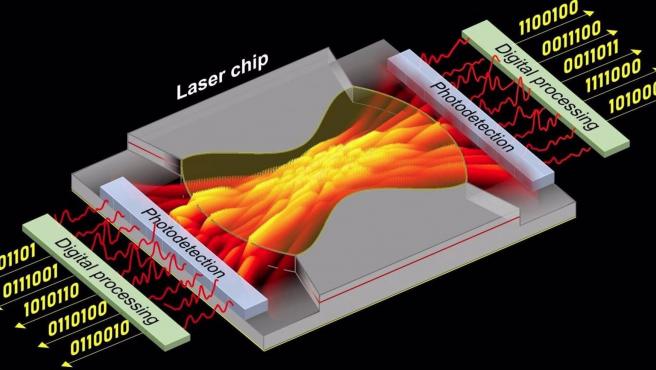 Random numbers are used for a variety of purposes, such as generating data encryption keys and one-time passwords (OTP) in everyday processes such as online banking and e-commerce to strengthen their security.

The system – developed by the universities of Singapore NTU, Yale and Trinity College Dublin – uses a laser with a special hourglass-shaped cavity to generate random patterns, which are made up of light rays that reflect and interact with each other. inside the cavity. When reading the patterns, the system generates many series of random numbers at the same time.

The researchers found that, like snowflakes, no two system-generated number sequences are the same, due to the unpredictable nature of how light rays reflect and interact with each other in the cavity.

The laser used in the system is approximately one millimeter long, smaller than most other lasers. It is also energy efficient and can be operated from any household outlet, as it only requires a current of one ampere.

In their study, published in Science, the researchers verified the effectiveness of their random number generator using two tests, including one published by the US National Institute of Standards and Technology.

The research team has shown that the random number generator made by NTU, which is faster and more secure than existing comparable technologies, could help safeguard user data in a world that increasingly relies on transactions from Internet.

“Today’s computer-managed random number generators are cheap and yet vulnerable to attack, as hackers could predict future sequences of numbers if they discover the algorithm used to generate the numbers. Our system is more secure now It uses an unpredictable method to generate numbers, making it impossible for even those with the same device to replicate it, “NTU Singapore professor and study leader Wang Qijie said in a statement.

At its speed, it would only take about 12 seconds for the system to generate a set of random numbers equal to the size of the information in the world’s largest library – the United States Library of Congress.

By delving into the future of the system, the team is working to get the technology ready for practical use, incorporating the laser into a compact chip that allows generated random numbers to be input directly into a computer.

Share. Facebook Twitter Pinterest LinkedIn Tumblr WhatsApp Email
Previous ArticleThe benefits of olives and how to choose the healthiest ones in the supermarket
Next Article Exotic foods in the diet: guarana, maca or royal jelly