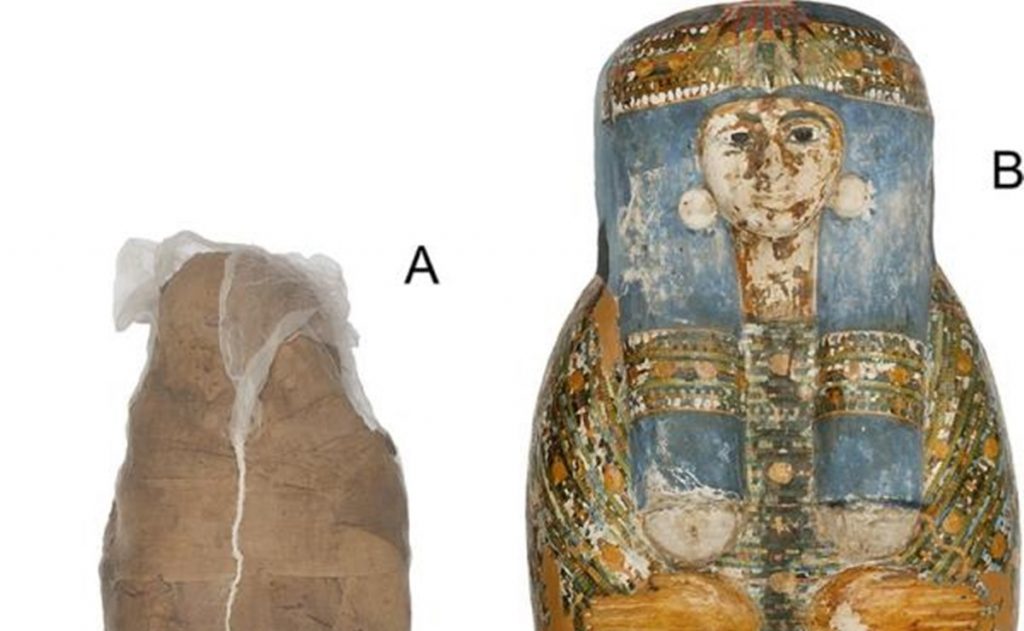 A clay shell that wraps around a mummy is the rare mortuary treatment identified on an Egyptian mummy, the body of which has also been found to predate the coffin, suggesting that it was placed there by 19th century merchants to sell as complete set.

A study published this Wednesday by Plos One reports a new analysis with modern techniques of a mummified individual from the 20th dynasty of Egypt. Although this treatment of the painted clay shell had not been previously documented in the literature, the authors note that its frequency cannot yet be determined and suggest that further radiological studies on other non-royal mummies could reveal more about this practice.

The mummy deposited at the Chau Chak Wing Museum in Sydney had already undergone a full computed tomography (CT) scan in 1999, but the authors, led by Karin Sowada of Sydney’s Macquarie University, repeated it with updated technology.

The new dentition and skeletal data determined that it was a young middle adult (26-35 years) and the bony secondary sexual characteristics (bones of the hip, jaw and skull) “clearly suggest” that it was a woman, explains University.

The analyzes also revealed the extent and nature of the mud shell, which completely envelops the body and is layered within the linen wraps.

Studies of mummified bodies from the late New Kingdom to the 21st Dynasty (1294-945 BC) have occasionally reported the existence of a hard resinous shell that protected the body within its shell, especially in the case of royal mummies of the epoch.

However, a clay shell that encloses the body of a mummified woman within textile wrappings “is a new addition to our understanding of ancient Egyptian mummification,” according to those responsible for the research.

Restore the body
The images revealed that the body would have suffered damage relatively soon after the initial mummification, and that the clay shell and additional wrappings were applied to reunify and restore the body.

In addition to its practical purpose of restoration, the authors believe that the shell “gave those who cared for the deceased the ability to emulate the elite burial practices of coating the body with an expensive imported resin shell with cheaper and more widely available materials. place”

But the study also brought to light another detail, and that is that the dating of the mummy and the sarcophagus that contains it do not match. Both were bought as a set by the Egyptologist and one of the founders of the University of Sydney, Sir Charles Nicholson, during a trip to Egypt in 1856 and donated it to the educational center.

The inscription on the sarcophagus identifies the owner as a titled woman named Meruah, and the iconography dates her to approximately 1000 BC. However, current analysis of the mummification technique and radiocarbon dating of the textile samples of the linen wrappings place the mummified body at the end of the New Kingdom (c. 1200-1113 BC).

This means that the body is older than the coffin, suggesting, according to the authors, that “local merchants in the 19th century placed an unrelated body in the coffin to sell as a complete set.

Share. Facebook Twitter Pinterest LinkedIn Tumblr WhatsApp Email
Previous Article‘The boy’ resurrects 100 years later: Chaplin’s masterpiece returns to the cinema
Next Article The carnage that marked the history of England: the landmarks of the country that resisted Hitler and Napoleon