Goya for the best film 2021: these are the nominees 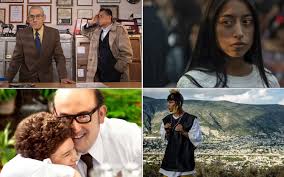 Five films compete for the most important award of the night: the Goya for Best Film. These are the five finalist works.
The Goya 2021 are just around the corner. On Saturday, March 6, the Film Academy will present its awards and decide which is the best film of the year. It will do so with a gala that will be held from the SoHo theater in Malaga and will be presented by Antonio Banderas and María Casado. Of course, the pandemic has made the nominees have to watch the ceremony from their homes. They will come electronically. A year in which five titles fight for the most anticipated award of the night, the Goya for Best Film. Here is a review of the five nominees.

Pilar Palomero’s debut feature is the great favorite to win. A year ago it was presented at the Berlin Film Festival, and later it passed through Malaga, where it won the Golden Biznaga for Best Spanish Film. A magnificent debut that sets its sights on the year 92 and on the girls of the time, who lived in a constant struggle between a country that sold modernity and an education in which sexual education was repressed. An initiation film that shows another side of that year so marked in the history of Spain and that has a magnificent cast.

The other favorite. A vital comedy, full of light and with a message that falls in love and fills the spirit of the audience. Icíar Bollaín teams up with Alicia Luna, with whom he wrote the script for I give you my eyes, to tell us the story of Rosa, a woman who decides that she is tired of being the sister, the daughter, the mother, and who finally wants to be her and enjoy her life. For this she organizes a wedding … with herself. In front of it, a cast that can devastate, with Candela Peña embroidering that Rosa and Nathalie Poza and Sergi López as a drunken sister and a brother-in-law with a good heart.

Another first feature nominated for Best Picture is Ane, directed by David Pérez Sañudo. One of the surprises of the year that tells the story of Lide, a mother who works in the safety of the high-speed train works in Vitoria, in 2009, in an operation that became known as the Basque Y and that produced a lot commotion in the streets. One day her daughter Ane de ella disappears and she tries to find her and begins to discover things about her daughter that she did not know. An intelligent portrait of the wounds of violence and terrorism in neighborhood families with a Patricia López Arnáiz who points to hers as the first Goya for Best Leading Actress.

The return of Cesc Gay has been with a comedy that adapts his own play: The neighbors above. On this occasion he changes the cast and signs Javier Cámara, Alberto San Juan, Belén Cuesta and Griselda Siciliani as two pairs of neighbors who have a meeting where quarrels arise between them and between the couples. Sex, love, crisis of the 40s … everything is coming out in this pleasant comedy that has almost all its cast nominated and that places Cesc Gay on the list of favorites again.

The most nominated of the night (opts for 13 Goyas) and the one that seems to be sweeping the technical categories. The largest of the candidates both in budget and commercial ambition. It arrived in January at the hands of Telecinco Cinema and said goodbye to the billboard due to the pandemic when it already had more than a million viewers, a splendid number for a drama about immigration that weaves stories. Salvador Calvo has already achieved a good handful of nominations with his first film, The Last of the Philippines, but with Adú he has managed to reach the top.

Share. Facebook Twitter Pinterest LinkedIn Tumblr WhatsApp Email
Previous ArticleThe Simpsons’ replaces Dr. Hibbert’s doubler for not being black
Next Article This is the film with the highest number of nominations in the history of the Goya Awards