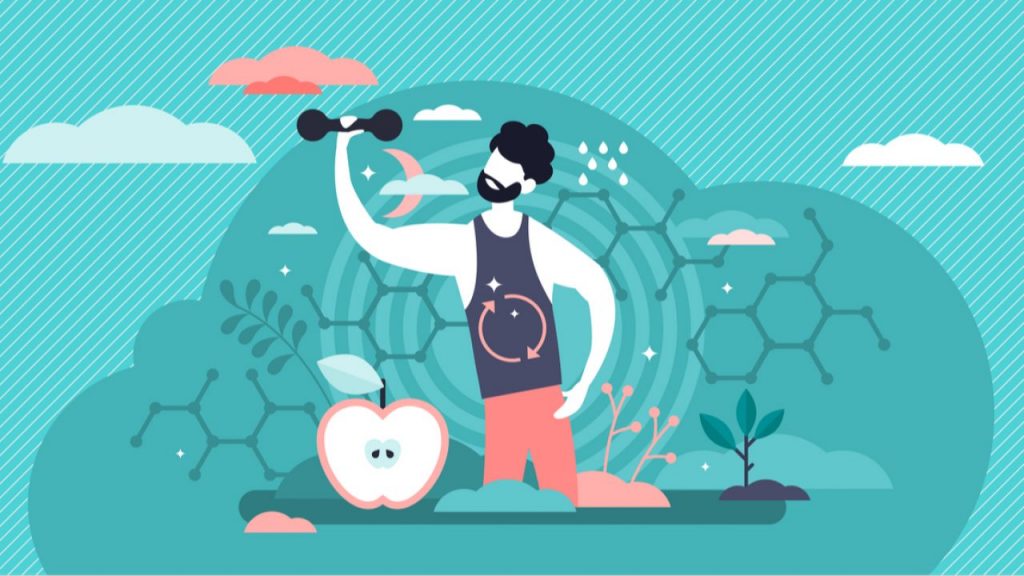 Before diving into the functions of metabolism, you must know what this process is.

The first thing you should know is that your body is made up of millions of cells. Inside each one, a set of chemical reactions occurs. These reactions are responsible for transforming the food you eat into fuel. This is essential for all vital activities, such as moving, breathing, sleeping … absolutely everything you can imagine!

The energy we produce through metabolism is called ATP (Adenosine triphosphate), and whether it is produced at a higher or lower speed depends on the thyroxine hormone, produced and secreted by the thyroid. Another essential hormone in metabolism is insulin, secreted by the pancreas and responsible for giving order to the cells to increase anabolic activities.

The energy that is not released to the body will not be lost. This will be used for the growth and repair of the body or the active transport of substances through cell membranes.

What are the functions of metabolism?

All the foods you eat, whether proteins, fats or carbohydrates, are broken down by small molecules called enzymes. This results in amino acids, sugars and fatty acids that, when absorbed, travel through your blood to the cells. There they manage to be metabolized and release energy or store it for when it is needed.

The most important thing is that the functions of metabolism will always be to provide you with the necessary energy to carry out your vital activities.
Types of metabolism

For specialists in the area of ​​nutrition, there are three types of metabolism:

Why does my metabolism slow down?

It should be understood that slow metabolism is not the main factor in overweight and obesity, although many believe it. Instead, the determining factors of weight gain are due to the interaction between genetics, physical activity and diet. [ACV1] When it comes to having a stable weight, you should pay particular attention because, in addition to the factors mentioned above, Hormonal diseases, lack of exercise, intolerance or allergy to some food, an inadequate diet, drinking little water, not sleeping enough hours and drinking alcohol or sugary soft drinks may also be harming you.

On the other hand, talking about slow metabolism refers to the slowness of the body to carry out specific chemical processes, which makes these people more likely to manifest some metabolic disease and gain weight.

They are produced by blocking some metabolic pathway in the body or by toxic effects of accumulated substances. The main ones correspond to prediabetes; blood sugar levels are higher than average but not enough to diagnose diabetes. We also find fatty liver, which is the accumulation of triglycerides inside liver cells. There is also type 2 diabetes, characterized by the fact that the body has less sensitivity to insulin, which is why it is not used, and the level of glucose in the blood rises. For its part, hypertension corresponds to an increase in blood pressure and is the leading cause of cardiovascular diseases. Finally, dyslipidemia is a disease characterized by high concentrations of triglycerides and cholesterol in the body.

Do not forget that before any change in your diet, the best thing you can do is consult with a specialist such as a nutritionist or a treating doctor.
Degradation of glucose: cellular respiration
As an example of a pathway that releases energy, let’s see how one of your cells could break down a sugar molecule (say, from the sweet you had for dessert).
t subscript, 12, end subscript, start a text, O, end text, start subscript, 6, end subscript) in a process called cellular respiration. During this process, a glucose molecule gradually breaks down in many small steps. However, the process has the following general reaction.

The breakdown of glucose releases energy, which is captured in the cell in the form of adenosine triphosphate, or ATP. ATP is a small molecule that gives the cell a convenient way to store energy for a short time.
Once ATP is produced, other reactions in the cell can use it as an energy source. In the same way that humans use money because it is easier than bartering every time we need something, so cells use ATP to have a standardized way to transfer energy. Because of this, ATP is sometimes described as the “energy currency” of the cell.
The manufacture of glucose: photosynthesis
As an example of a metabolic pathway that requires energy, let’s flip the previous example to see how a sugar molecule is built.
Plants make sugars like glucose in a process called photosynthesis. In photosynthesis, plants use solar energy to convert carbon dioxide gas into sugar molecules. This process happens in many small steps, but your general reaction is just the reaction of breathing in reverse.

Like us, plants need the energy to drive their cellular processes, so some of the sugars are used by the plant itself. They can also provide a food source for animals that eat the plant, such as the squirrel shown below. In both cases, glucose will break down through cellular respiration, generating ATP so that the cell can continue to function.